If you’re an American fashion designer, you’ve probably dreamed of being featured on a New York Fashion Week runway. When my line walked the runways of New York, I felt like I’d made it! People recorded and shared their favorite DAYKEYLA pieces onto their social media pages. My Instagram was full of tagging notifications! I realized I was one introduction away from dressing a celebrity. ‘One word of mouth’ away from having my avant-garde gowns walk the red carpet of Met Gala. My dream was coming true! Suddenly, many conflicting emotions began to crowd my spirit. An overwhelming fear of failure and success. Exhausted by the work but joyous about what I’d accomplished. Five long years of hard work.

“Every great dream begins with a dreamer. Always remember, you have within you the strength, the patience, and the passion to reach for the stars to change the world.”

Oxford Fashion Studio approached me after the launch of my line in 2013. My first collection, “Flamenco Couture,” consisted of three looks. It was incohesive, but my design aesthetic was quietly emerging; the use of bright colors, orange and blue complementary colors, silk organza peek-a-boos strategically placed amongst the models’ curves. Oxford saw my potential, but as a struggling single mother, I couldn’t afford the expenses of travel and a fashion show. Determined to follow my dreams, I emailed the Oxford representative affirming that I would be ready to show in a few years. It was a promise I made to myself.

Fast forward three years, I’d produced my runway show for my new collection, “Scorchering.” This collection consisted of 6 looks and was more cohesive than the last. My artistic voice became distinct as I continued to use bright colors, paired orange and blue tints, and organza transparencies highlighted the models’ bodies. “Scorchering was ultra sexy, classy, and unique. Outside my growing career, my personal life had become calmer. More settled. More harmonious.

Soon after Oxford first reached out, I’d move into a spacious loft within an artistic community. Being surrounded by other creative individuals inspired me. The trees outside my panoramic windows. The sunrises, the sunsets. The open space and high walls made it easier to expand my lungs and breathe. My mind opened, and my thought process flourished. After experiencing such success with my “Scorchering” fashion show, I figured it was time to fulfill the promise I’d made to myself years ago. Oxford’s pricing had increased considerably, but the company had gained quite a following for their exclusive shows. Knowing it would be a struggle, I pushed forward and cut some of my living expenses.With all the financials set, it was time to work on the collection itself. Inspired by the aesthetics of women, like Morticia (Goth) and Harley Quinn (fun), I produced “Schizo.” This collection was quite different from my previous one. The colors were darker, and instead of organza, I used metallic meshes.

It was time to get on the road! My Mother, Aunt, sons, and two cousins packed ourselves into the rented van. The drive was about seven hours, but the anxiety and excitement made it seem longer. Since it was my family’s first time visiting New York, we booked our hotel in Manhattan close to Times Square and other destinations. While my family toured, I’d stay behind to finish working on needed fitting adjustments. There were meet and greets, model fittings, and show planning events that I had to attend. Like a “Project Runway episode,” unfortunate circumstances occurred.

My model fittings did not go as planned, and my support team looked worried. Some hems were too short. Some garments were too small or too big. It was the day before the show, and nothing seemed to be going right. Fear, anxiety, confusion, and shame began to set in. I began to question my capabilities as a designer. I had one day to get everything right and to construct more accessories and garments. It was a real Tim Gunn, “make it work” moment. Nonetheless, I did not get that far to give up. Failure wasn’t an option. 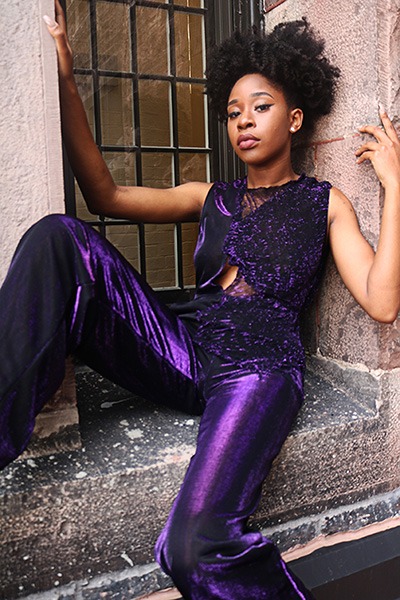 After the model fittings, I’d rushed to Mood Fabrics to purchase the rainbow sequin fringe I’d used on a top in look 4. Using a pair of existing earrings and the fringe sequin, I created an accessory for look 3 to tie in look 4. Although I was only showing six looks, I’d made a smart decision and constructed eight before arriving in New York. I wasn’t planning on showing look 5 and 6, but after slimming the waist and cropping the hem of the top they were ready for their encore.

After staying up all night working on perfecting my garments it was showtime! My stomach knotted, my eyes watered, and tears trailed my cheeks as reality set in. My Mother and Aunt never made it to their seats due to setbacks of New York traffic. I was alone and afraid. My support team dressed my models as I gathered the butterflies in my stomach. Everything was perfect. All the long hours. All the hard work. All the changes I’d made were worth it.

The models lined up, the music began to play, and they began to walk the runway. I was showing at New York Fashion Week! As I walked the runway behind my models, everyone pulled out their phones and recorded. The pride and success I felt were indescribable. After the show, I had a couple of publication interviews, which made their way to a few fashion week websites.

The following morning, I woke to multiple messages, offers, more interview requests, and numerous opportunities to show worldwide. Unfortunately, I could not participate in most of them due to personal and financial reasons. My New York Fashion Week show was more successful than I’d expected, but I’d learned to be more prepared for the opportunities that come after the show.

Arriving home after New York, I immediately started creating my next collection. Preparing for the next show, I obtained a higher paying job that would allow me to invest more in my fashion line. The new challenge is finding the time to work on my collection while simultaneously raising my children and working nine to five, but quitting is never an option. Covid has caused setbacks for our planned 2020 show, but September 2021 will be magnificent.

Welcome To Our New Boutique

This site uses Akismet to reduce spam. Learn how your comment data is processed.

Welcome To Our New Boutique

My Story, Self Love